Swallows circling the tractor and plough – dozens of them. We wonder, are they playing, or harvesting the flying insects which are put up from the stubble.

There’s a lot more like that, but my editing skills are worse than my filming skills and I had my finger over much of it.

It looks like a game, they swoop dangerously close to the tractor, as if surfing the thermals rising off of the engine, and dive across the plough to come around again. Maybe this is fitness training for the arduous journey ahead of them. Migrating birds, with hundreds of dangerous miles to cover. Topical at the moment. I wish all who embark on such fearful travels could be offered Godspeed and safe arrivals. 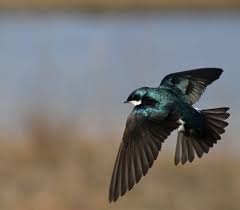 Here’s what the RSPB  says about their journey:

By early September, most swallows are preparing to migrate. They flutter about restlessly, and often gather on telegraph wires. Most leave the UK during September, with early broods of youngsters being the first to go. But a few stragglers may hang around into October.

The return journey to Africa takes about six weeks. Swallows from different parts of Europe fly to different destinations. Ours end up in the very south. They travel down through western France and eastern Spain into Morocco, before crossing the Sahara Desert and the Congo rainforest – finally reaching South Africa and Namibia.

Swallows migrate during daylight, flying quite low and covering about 320 km (200 miles) each day. At night they roost in huge flocks in reed-beds at traditional stopover spots. Since swallows feed entirely on flying insects, they don’t need to fatten up before leaving, but can snap up their food along the way. Nonetheless, many die of starvation. If they survive, they can live for up to sixteen years.

Hard to believe that a small bird can conquer such an endeavour.

We unearthed a horseshoe too.

Every year the plough turns up interesting treasures, but this one intrigued us because it is round. Remedial shoeing for a horse which once pulled a plough? Or possibly more recent, it looks small for a heavy horse (5 1/4 inches across). Like many of our finds, it throws up more questions than answers.

It must be autumn.