So, I’m still editing, although I had hoped to be launching A Bed of Brambles about now; a year after A Bed of Barley Straw hit the shelves. Ho hum, it’s got to be right. Deadlines and launch dates are secondary to the life of the story, so I’m letting myself off the hook. But I’m still working hard, setting deadlines, but avoiding naming a launch date yet.

I’m editing on the sofa, because the new hip complains if I spend too many hours at a desk. Painting scenes with my pen (keyboard actually, but pen sounds more poetic), creating characters for you to meet, hoping you love them enough to want to dive in. Telling stories to make you laugh, gasp, cry (and get a bit hot under the collar). That’s important stuff. I sweat over the detail so you can be swept along, without being tripped up by disbelief, clumsy words, wonky timelines… That’s the hope, anyway.

I’ve got an editing mate with me, he’s just chillin’ in the warm.

By coincidence, in Chapter 25B (rewritten/edited from chapter 25draft1, 25draft2, 25A), the chapter I’m currently working on, they are heading into March at Draymere Hall too. They’ve had snow, (so we’re doing better in the real world), Alexander is lambing, and Hettie… well, I won’t tell you what Hettie is up to, three quarters of the way through the book, but here’s a sneaky scene setting excerpt…

Hettie was at her mother’s old house, to clear out her bedroom. She’d been putting the job off for weeks, but the ‘for sale’ sign was up now, she really couldn’t delay it any longer. She found the key in the usual place; third flowerpot from the left under the larder window. Easy to find in daylight hours, she remembered it being more of a challenge in the days when she had stumbled home in the dark, from whichever pub her and her mates had spent the evening in. Her mum’s absence was obvious, even in the garden. The paths hadn’t been cleared of snow, shrubs bent underneath it. Hettie shivered. She had to give the door a shove to make it open. Empty room, squares on the walls where pictures had hung, undressed windows. Swept and hoovered of course, but the house looked sad and worn out. Someone would buy it as a renovation project. Hettie wandered through the rooms, reached her old bedroom. The furniture gone, most of it to the bungalow, but the floor stacked with boxes; old clothes, school books and knickknacks. It could probably all go straight in the bin. She sat on the floor, cleared space around herself for three heaps; rubbish, charity, keep, and got to work.

At the bottom of the last box she found her old diary; pink and grey stripes, broken padlock, dog-eared cover. “HETTIE’S DIARY – KEEP OUT!!!” She threw it on the rubbish pile, scooped the heap into an empty crate, picked the diary out again and shoved it into her shoulder bag. It was cold in the house, and the dogs would be wanting their dinner. Hettie carted the boxes down to the Landy, wrenched the back door shut. Slid the key into its hiding place; third flowerpot from the left, under the larder window.

… A Bed of Brambles, coming soon, I promise. 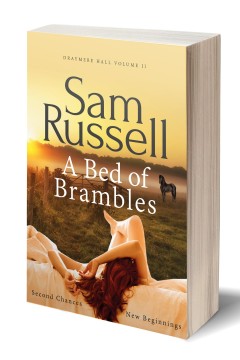 ps If you haven’t read the first one yet, it’s free on Kindle at the moment.