The chaff house door, and I wonder how many farmers  have grabbed that rusty handle and pushed the rickety door. Although it wasn’t always rusty and rickety of course, it was a new barn once, built to house the hand-worked chaff machine, to strip the chaff from the grains grown on the farm.

The barn is charming, romantic and rustic, but that must have been back breaking work. Back in the days when the farm employed most of the men in the village, and a land army of women when the men were sent to war. Heavy horses working the land alongside them, and then the steam engines came along, moving from farm to farm to power the threshing and baling machines. Still loaded by hand of course. 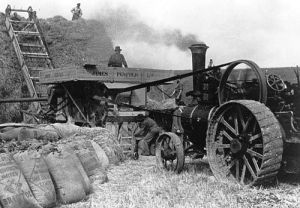 Quaint in the photographs, great to watch at a country show, but my nostalgia isn’t such that I would want to live the farming life of the days before mechanisation and combine harvesters.

We watched a steam engine working a baling machine at our local steam-up. That particular engine had broken records for hay baling, back in the day. The hay it was baling then went to France, to feed the horses who who were fighting alongside the men. That makes you think.

In my time on the farm, our chaff house has stored hay and straw, the clay pigeon pull and an odd collection of random wood and bits of farm machinery. I think there’s some furniture in there too. Right now, it’s a store for the plastics; the spray cans and fertiliser bags which are waiting to be recycled. Which may be it’s least romantic job yet, but that’s progress for you.

One thought on “Sorting the chaff from the wheat”