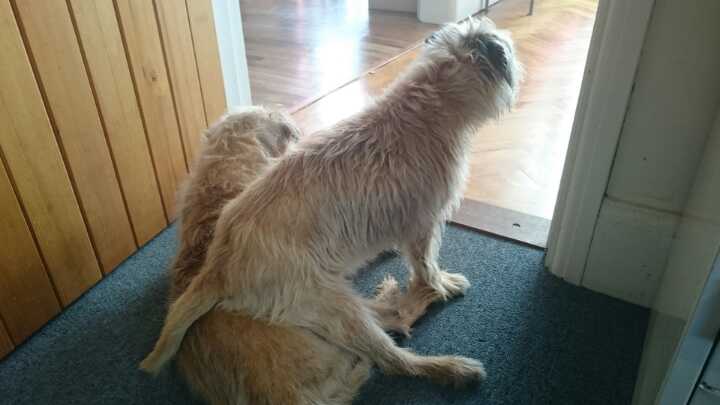 The Kennel Club standard describes Border Terriers as ‘active and game’ and ‘essentially a working terrier, capable of following a horse.’

My little big man (Russ) arrived in our life in 1998, and he was game from day one: Tripping over my heels as I trudged to the stables, ready and willing to grapple with a 17 hand horse that didn’t want to share its breakfast. Plucky little chap, it was love at first sight. I was smitten, and I basked in the satisfaction of being his leader, protector and mistress.

For a few precious weeks, until puberty struck and he underwent a werewolf-like transformation, morphing almost overnight from mild-mannered pup to canine rebel commando.

Never nasty, nary a growl or a grumble at any human, but Lord have mercy on the rest of the animal kingdom. If it moved he wanted to kill it, and if he couldn’t do that his job was to tell us it was there, outside the window. He could tell us all night if need be. The word ‘dogged’ could have been coined for my little big man.

But I must be game too, because in 1999 I went back and bought his half-sister.

Nutty Meg spent her first night with us suspended over the wooden rail between the legs of a kitchen chair. I would like to stress that this was very much her choice, not mine. I wondered what the hell I’d bought into the house, and employed every method of persuasion that I had in my arsenal. None of them worked. The puppy bed and hot water bottle were rejected in favour of a wooden hammock.

Nutty Meg trembled a lot, a combination of attitude and several neuroses. Little big man found her existence beyond annoying, but he took it well. The mildest of profanities when she hung off his ears and attacked him in his bed. He told her off once, when she got over-frenzied playing tug-of-war with Youngest Daughter’s sock. That was the first and last time she listened to him. Or to anyone, come to that.

Nutty Meg wasn’t scared of any living thing, but she was phobic of crossing the kitchen floor, hated water but laid down in muddy puddles. She took on the farm truck (and lived to tell the tale), slept with the cat and washed little big man’s ears. Wouldn’t eat her food, but was ferocious if anyone tried to remove it. Would rather be carried than go for a walk, but could outrun a gazelle (if need be).

And I can confirm that Border Terriers are capable of following a horse… If they want to, and if the horse is going the way they’re intending to go.

A neurotic lap-dog/feral bitch and a canine rebel commando.

Two Border Terriers, about to gang up, and the adventure only just starting. Tune in next time for A Tale of Two Dogs, episode 2 (Partners in Crime)

One thought on “A Tale of Two Dogs, espisode 1 (Game is Right)”