I’m Anglo-American themed this week. We live and farm on one of the many old airfields in the East of England which hosted the United States Army Air Force during World War II.

The runways are farm tracks now, and the Nissen huts store agricultural clutter, but that history has the power to snare.

As a child, I knew the ‘drome’ well. I didn’t live on it then, but I rode my pony over the concrete paths, cycled across it to reach the nearby village and played with mates in the control tower. There was a chalk board with writing still on it, we all thought the place was haunted. 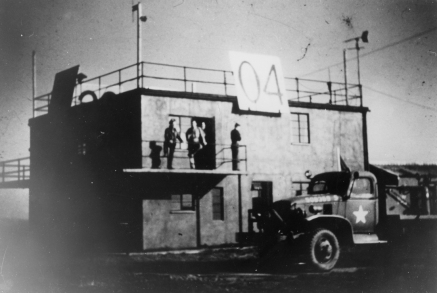 Later on, I crossed the drome on my way to work, sometimes behind the snow plough as the farmer forged an escape through car-high drifts which often covered the road on that wide, treeless plateau (back in the olden days, when we had proper snow). But it wasn’t until I married and moved to the drome that the story of the people who had lived and worked there became real.

The plough turns up flints, hardcore for runways, and the land offers up all manner of military shrapnel. We dredged the pond and found a pair of discarded army boots, there’s a rusting belly tank a mile along the footpath and one of our fields is called ‘bomb site’.

Some years ago we excavated a single propeller from its resting place deep in the earth. It came from an A-20 Havoc, which crashed returning from a combat mission, on the 30th July 1944. The crew are buried in the American Cemetery. Three of the many young American men who didn’t make it home.

I can barely imagine what ‘our’ airfield was like at that time, for the locals who lived there, or for the brave men (and boys) of the USAAF who were fighting so many miles from home. Our village has sewn a banner to remember them, it hangs in the church, and we’ve collected some of the villagers’ memories in a booklet. Here’s an excerpt:

Reg remembers that you could hear planes warming up for morning raids before you got out of bed in the morning, and he used to go up to the aerodrome with his friends before school to watch them all take-off. The aircrew were briefed in a hut which still stands on the lane, and is now in use as a workshop. Guards stood in place outside the doors when a briefing was taking place. The planes’ engines were warmed as they stood on the dispersal points around the airfield, before being topped up with fuel. Then they went to the ends of all three runways and took off in different directions, crisscrossing as they climbed. The whole lot would be up within minutes. They would circle once, get in formation and be gone. And when he came home from school Reg got back on his bike to go and see what damage had been done and how many of the planes had not come home, leaving empty parking bays.

The local history reminded us of happier stories too.  Christmas parties for village children, dances and friendships which endured through the years and across the Atlantic long after the war had ended. The exchange of eggs and milk for nylons and gum. Flowers picked from Cottage gardens and offered to English sweethearts by American Servicemen. Marriages and heartbreak. Families welcoming servicemen into their homes; baseball and big band music.

The village knew something was changing when white stripes were painted on the planes, but when the USAAF Eighth Force left they were gone overnight. There was no chance to say goodbye, and the airfield stood derelict.

‘All that life and excitement, and then they were gone.’

The Tudor farmhouse stood throughout the war, and saw good use as a secret meeting place for American airmen and their sweethearts, as an adventure playground for local children and as target practice for dummy bombings.

Margaret remembers the old house as a magical place, with rambling roses and beautiful, big windows; but Reg remembers it as a ‘knocking shop’ for the Americans!

3 thoughts on “The USAAF in an English Hamlet”